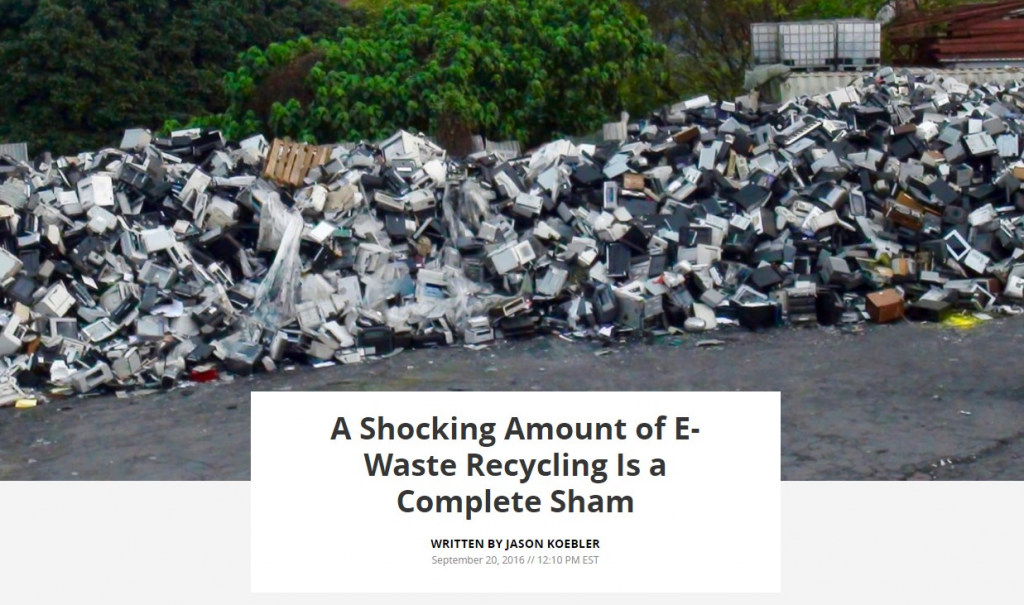 The Vice article, titled “A Shocking Amount of E-Waste Recycling is a Complete Sham,” was written by Jason Koebler for Vice’s Motherboard channel and features revealing information from environmental watchdog group, Basel Action Network (BAN), who recently revealed its own report on unethical ‘e-dumping’ after secretly planting GPS trackers into 205 old printers and monitors and then delivering them to US charities and recyclers.

The effort revealed that of those that were handed over to American electronics recyclers, 40 percent did not get recycled in the US as expected by customers, but were instead exported to highly-polluting and unsafe operations in developing countries — mostly in Asia. BAN’s report also directly uncovered that 75 US recycling entities were illegally shipping e-waste to developing nations.

Shegerian and the BAN-certified e-Steward, ERI, are also featured in the Vice article as an example of an organization that actually recycles all items here in the United States and provides complete data destruction.

“Unethical and illegal shipping of e-waste abroad is a problem that is now spiraling out of control,” Shegerian said. “Responsible recycling costs money, but it is an investment in the environment, the people of this planet…and in long-term data protection. The unbridled shipping of our electronics overseas has greatly contributed to the wholesale liquidation of our environment, our national security and the security of the corporations and individuals of the United States. Something significant needs to happen at the federal government level to stop this now.”

Shegerian also praised Koebler and Vice for shedding additional light on the issue.

“Unfortunately, we believe that what BAN and Vice have exposed are just the tip of the iceberg,” added Shegerian. “The fact that many so-called recyclers continue to ship their e-waste to third world countries for inadequate processing instead of responsibly recycling domestically is a huge problem that’s getting worse.”

Read the entire article at Vice.com